How I Came to Write
Prayers for Light and Strength

I wrote this book while I was on a pilgrimage in the south of France to study Mary Magdalene and the Divine Feminine. Mary Magdalene became my saint when she appeared, out of nowhere, at a painting workshop in Connecticut. She entered the gates of my consciousness, which became increasingly filled with her presence day after day. I entered into a mystical relationship with the apostle of apostles, who had been labeled a whore for nearly two thousand years. Little did I know that I would soon turn my life upside down to follow her steps all the way to France.

In the summer of 2016, I packed up my NYC apartment, gave away everything I possessed except some sentimental memorabilia, and arrived in Provence with my two daughters and a few suitcases. Just before then, I'd signed my first publishing contract, but I'd been working over 50 hours a week for CHANEL at a fast-paced department store in downtown NYC. I had a 3-hour daily commute, and I was a truly single mother as my ex-husband had moved to Hong Kong for a professional opportunity he couldn’t pass up. I knew that I wouldn’t be able to sustain this mad pace for long, especially if I wanted to write a half-decent book.

I was also terrified by the idea of mothering my girls by myself in the concrete jungle of New York City. I felt bitter until the siren call came one bleak night in January. I woke up at 4am with this thought: "What if I moved back to France?" I had left my native Normandy fifteen years earlier, and never thought I would ever return to my native land. But now I felt that France would afford me freedom and inspiration. I got out of bed to research the cost of living there and realized that I could reside in France for a while without working. Voila! 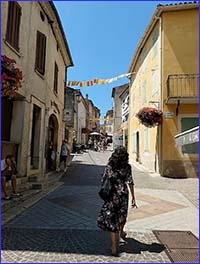 The decision was made. By that time, I had been on the spiritual path for about four years and I had become acquainted with Divine guidance. I knew to follow marching orders when guidance was dropped into my interior castle. I knew that the Divine was calling me to a small town in Provence called Saint-Maximin-la-Sainte-Baume, the medieval town that holds the relics and history of Mary Magdalene.

French tradition relates that in A.D. 43, Lazarus, Mary Magdalene, Martha, Mary Jacobe, Sara, Maximus (one of the 72 disciples) and Salome arrived on a boat without oars near the sea town of Saintes-Maries-de-la-Mer. Pontius Pilate’s wife Claudia Procula was a native of southern France, and that area of Gaul was under Roman rule at the time. Upon their arrival in Marseille, Lazarus and Mary Magdalene took refuge in the pagan temple of Diana. Lazarus later became the first bishop of Marseille according to Provencial tradition. Mary Magdalene traveled eastward to the mountain range of Sainte Baume and Martha went west to a town called Tarascon.

When we arrived, we found our house at the end of a cul-de-sac without even a number. I had no idea what was awaiting me. I knew one thing: my life would become forever transformed, and there was no turning back. The valleys and fields of Provence are soaked with the stories, the scents, and sacred sites of the Divine Feminine. Intellectually, I knew what the Feminine looked like, in terms of externality expressed in makeup, short skirts, cleavage, and pretty hair. But I had never experienced the feminine principle as a living, inner realm from which everything is sourced.

During that one-year sacred pilgrimage, I went up to Mary Magdalene’s grotto and basilica every week. I sat on the stone steps of the Gallo-Roman crypt underneath the basilica, and I spent hours in contemplation with my Moleskine journal on my lap, jotting down the prayers that are in Prayers for Light and Strength. That external and interior journey changed my life as I entered the world of my repressed Feminine. I became acquainted with a love that is higher than any earthly love, the love that I had craved my entire life as an orphan. It was ironic that I had to return to my homeland to retrieve what I thought was outside of me: a visceral plug into the most divine love.

This book represents a pilgrimage of faith. It is also an invitation for you to venture into the majesty of your inner world. Prayer and meditations are rungs on the ladder into that realm. They lead our busy, fragmented mind upward to return to silence — to the inner stillness space where all our selves can gather in the presence of the soul and experience eternity. 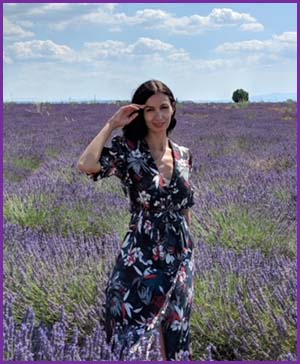