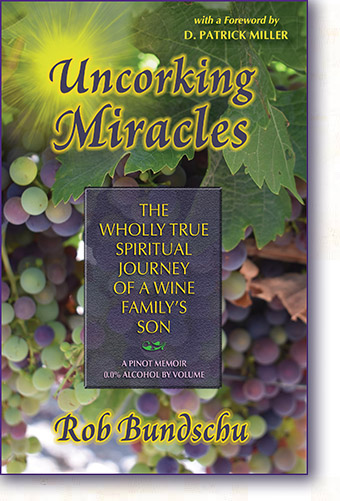 As the young scion of a sixth-generation wine family in northern California, Robert Bundschu was just minding his own business — drinking like a fish, getting into trouble — when it dawned upon him one day that he wasn’t really having any fun.

This was the first subtle push toward a spiritual journey that would eventually lift him up to heaven, help him make sense of a plunge into hell, and finally give him solid footing on a healing path.

Raised on the grounds of the historic Gundlach Bundschu winery in Sonoma, Rob grew up tying vines to trellises, chainsawing tough manzanita shrubs, and otherwise preparing to become the farmer he sensed he’d never be. At 26, a wine-soaked run as the national sales manager for “Gun Bun” worked well enough, until a dramatic break with reality knocked him out of his everyday routine and changed his life forever. Eventually, a stint as a bookseller introduced Rob to a wealth of spiritual literature that included A Course in Miracles, the modern transformational teaching that would revolutionize his life.

The startling story of how Rob Bundschu survived all the highs and lows of his life to return to the family business — now happily married and dedicated to a miraculous way of life — is a journey worth a toast, whatever your drink of choice.

all digital formats including Kindle

from the Foreword by D. Patrick Miller...

My favorite part of this honest, simply told, and engaging life story by my friend Rob Bundschu is his recollection of seeking, during one dissolute phase of his life, the ‘P4BB’: the Perfect 4-Beer Buzz. There could be no better metaphor for what depth psychologist Carl Jung described as the unconscious objective of alcoholism: “the equivalent, on a low level, of the spiritual thirst of our being for wholeness.” William James likewise suggested that “... drunken consciousness is one bit of the mystic consciousness, and our total opinion of it must find its place in our opinion of that larger whole.”

Rob’s riotous and sometimes hallucinatory search for a mystic consciousness eventually led him to the modern spiritual discipline known as A Course in Miracles (ACIM), which has been described as “graduate school” or the “13th Step” for followers of the addiction recovery method known as the Twelve Steps of Alcoholics Anonymous. I’ve written widely about the Course and met Rob, in fact, while waiting in line for dinner at a Course conference some years ago.

While it’s not unusual to meet recovering alcoholics in the ranks of ACIM students, what was distinctive about Rob was his sixth-generation membership in a family that runs the legendary Gundlach-Bundschu Winery in Sonoma, California. As his early yearning for the P4BB reveals, Rob did not depend solely on “Gun Bun” vintages for his experiences of low-level mysticism. But at least his roots were sunk deep in the same soil as some of the best fermented spirits available....

When I was around nineteen years old, I was drinking some beers with my friends (shocker). By then, we had discovered the joys of alcohol, and would sneak some beers or wine here and there when there were no parents around. Note: it wasn’t always beer and wine. For instance, my friend Chris’ dad traveled often for work and he would collect those little liquor bottles you get on the airplane. On one occasion, we raided that garbage bag full of those little liquor bottles, which rested on the floor in his dad’s closet, and we drank them and had a ball. But on this weekend, anyway, we were drinking some beers.

As I sipped my third or fourth beer in Chris’ backyard, I randomly reviewed my young drinking “career.” By then, we’d had many alcohol-infused weekends and alcohol-related experiences; high school parties, weekends at Chris’, or when my folks were away. Fairly typical. As I reviewed my experiences with alcohol, I recalled that on several occasions, I had had too much to drink and, in one form or another, made a total ass of myself. Or worse, I was cruel or mean to someone in some way I was not even aware of. On most occasions, though, we didn’t overdrink too much and would end up having a great time. The one thing that I was keenly aware of as I sat there having this early life review was that drinking (as most people know) took away all my fear and sense of guilt. At least temporarily. Which is why I loved to drink so much. So the payoff was a seemingly deep sense of peace that came with the effects of alcohol. But drinking too much would, and occasionally did, lead to disaster.

I was thinking about all this loosely as I sipped my beer. Thinking about the range of drunkenness. One to three beers, you don’t feel too much—perhaps a little buzz, but the world is still basically the same. Five to fifteen+ beers, and you, in short, can become an idiot. Say things you don’t mean. Do things to others or yourself you completely regret. Ahh, but four beers. That, I noted as pondered these things, was the happy zone.

A perfect four-beer buzz. At four beers, I usually felt not just a buzz, but an inner glow. At four beers in, all my troubles — with relationships in my family, my in securities and self-loathing related to my “lower” position in the pecking order of my rat pack of friends, underperforming academically at school, shyness around the girls I had a crush on, that never-ending sense of guilt—all that was behind me, or out of my mind, at four beers. At four beers in, I was a truly happy camper. It is a perfect buzz, low enough that I still have sense enough not to do anything stupid, but high enough that I could be my true self. At four beers in, I was, at least in my own mind, fearless, funny, part of the gang, comfortable, and free. My best qualities came out at four beers. Liquid confidence. Four beers. I loved a four-beer buzz.

And so sitting there in Chris’ backyard drinking my beer, I thought, wouldn’t it be great if I could have a four-beer buzz all the time—a Permanent Four-Beer Buzz? That would be ideal. I could be happy if I had a permanent four-beer buzz. Just think what life would be like then, free of fear and guilt....