Are you ready to release every inner
wound you have — from this
lifetime or any other?

Join Barret Hedeen as he does just that, in this surprising journey of releasing “stuck” and even ancient grievances. The expansive spiritual teaching of A Course in Miracles is lovingly explained in the context of Barret’s mind-opening work with past lives. With insightful commentary and simple exercises drawn from his experience, Barret invites you to step into inner peace yourself. Jump into this book for the revelations and renewals he goes through — and walk away with a deeper sense of your own path to awakening.

“With this beautiful book, Barret Hedeen gives us a concise, practical, and very useful explanation of how to break the ego’s cycle of karma and set your path firmly home to God. I was both impressed and entertained....” ~ Gary Renard, best-selling author of The Disappearance of the Universe trilogy and The Lifetimes When Jesus and Buddha Knew Each Other

“I am struck by Barret’s willingness to allow whatever is coming up in his experience to rise and be healed. We can all learn from his example.” ~ Corinne Zupko, award-winning author of From Anxiety To Love

Barret Hedeen has been teaching and learning A Course in Miracles since 2006. He is an energy healer and past-life intuitive who uses a non-dualistic healing technique he calls The Witness Energy Healing. Barret leads classes and retreats around the world supporting people in letting go of their inner shadows and coming into their light. He is the author of Questions for J – And the Love That He Gave Me, and Poems for J. Find out more at www.BarretHedeen.com. 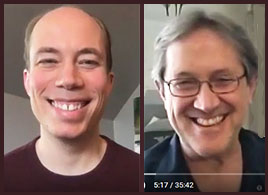 Only love is strong because it is undivided. The strong
do not attack because they see no need to do so.
[ACIM Chapter 12, Section V.1]

Pain… A fog of fear, uncertainty… Emotions merging into an awful, tremendous guilt. This cloud of emotions coalesced into a memory: I had pressed the button. I was flying with my squadron over enemy territory, thinking “They deserve what they’re getting.” Hard-jawed and with a steely focus, I was the bombardier, dropping massive destruction onto the chosen targets, killing the ‘bad guys’ and anyone else who happened to get in the way. People I cared about, fellow soldiers who were my friends, had fallen to their last attack, and I was sure as hell going to give them my best in return. I didn’t choose the places that we dropped the bombs, but I gladly fulfilled my function.

Back in this life, I was aching with the pain of the death and destruction. Every time we commit an act of violence, no matter how ‘justified’ or ‘popular,’ our soul is burdened until we are ready to forgive and release it. Breathing, I simply allowed the emotions to surface — pain, shame, guilt, rage — a maelstrom of feelings coursing through me. In the original experience, I couldn’t afford to experience all this, and wasn’t conscious of most of it anyhow. I just bottled it up, and now here it was, spilling up and out, a sense of pain shifting into a gradual relief.

My breath continued. The memory and pain and shame settled back down. I felt a sense of relief and healing, as though a heavy cloak I had been carrying around all unknown had just been lifted from my shoulders.

Cindy encouraged us to come back from the group healing meditation. The emotions and memory receded further, as I began to find myself in my surroundings. The other nine participants in the class were coming to as well, stretching as they continued to release the remnants of their old feelings.

As we gathered into a circle, we were invited to share any of our experiences that we felt called to. I volunteered my past life story of bombing and killing, regret and shame, as well as the beautiful gift of grace as I was unburdened, like a dark shadow melting before dawn’s gentle rays. As I shared, I was greeted by several knowing smiles, kind and unjudging, knowing that a profound healing was taking place within me. Others shared as well, childhood pains and traumas mixing with sometimes obscure and abstract issues. Kindness and a release of pain were common elements in all our stories.

Participating in Cindy Libman’s energy healing classes had been eye-opening and deeply healing for me. I had gotten in touch with so much that I had either suppressed or simply didn’t know was within. The open-hearted experiences I was having were deeply liberating and an indication that I was making headway on my path. Others’ experiences only served to reinforce the new perspectives I was realizing were true. I was seeing that all my issues in life could shift toward healing if I allowed that loving influence within to come forward and unfold. Acts of unkindness, including actual violence, were capable of being healed by gently witnessing them with care and kindness.

At the heart of the Course’s teachings is the idea that there is only one problem, and that is the belief that we are separate from God. We are not really separate, but it’s certainly true that we believe it, usually at a deep and unconscious level. This belief is so existentially painful and horrific that we have collectively pushed it out of our minds. This pushing, which you could also call projection, is still happening, and is painful and destructive for all of us. By pushing away the guilt and suffering caused by believing that we have done the unthinkable, we maintain the material world of separation that we see.

Our whole experience of time and space is a testament to the idea that separation is real. Time seems to be divided into past, present and future. Then the past and the future can be further subdivided — an hour ago, a day ago, a year ago, a millennium ago. What is here now was not here then, and will not be here in the future. Time seems to prove that change is real, but it is not. It is simply an experiential delusion. Space also seems to prove that separation is the truth. My body occupies a different place in space than your body; the window I am looking out while I write this is separate from me in space. The tree in the backyard is separate. All things and bodies seem to prove the separation real. What we don’t usually recognize is that this whole universe was made up to prove the separation is true. The idea of separation came first in the mind, and the world is nothing but an unreal effect....