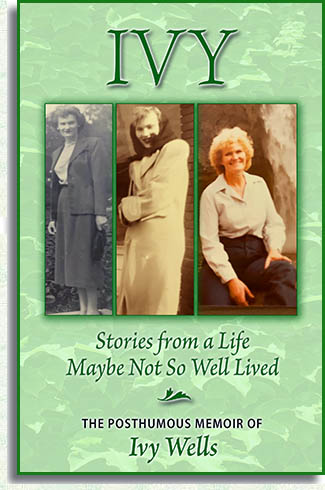 NEW FROM FEARLESS ASSISTED PUBLISHING:
IVY:
Stories from a Life Maybe Not So Well Lived

A POSTHUMOUS MEMOIR
by
Ivy Wells
______________________
This raw, tender, and unguarded collection of memories takes the reader on a vivid tour of the life of an unconventional 20th Century woman.
Born a century ago, Ivy Wells experienced the Roaring Twenties, the Great Depression, World War II, and the challenges of being an independent female in times of rapidly shifting social mores.
From “The New Deal and High School Sex” to “The Jitterbug and the Battle of the Bulge” and the frank admission of “Making Pornography,” Ivy provides a plain-spoken, unapologetic, and often wry masterpiece of passionate free expression.
Looking back on a life that was “maybe not so well lived,” Ivy Wells will inspire her readers to look at their own histories with a clear-eyed compassion.

PREFACE
This is the story of my sister Ivy, who suffered a life of mental and physical abuse. Thankfully, she did have some moments of happiness. She gave me this manuscript shortly before her death and requested that I have it published.

This is given to you, my readers, for the insights and inspiration that you may find in Ivy’s true storytelling. I admit that I did not know her well because I was her baby sister. Yet by reading her story I came to know her, learn from her, and love her more. We are all more alike than different, and when someone tells the truth about her life, it helps us all to recognize the truths of ours.

I don’t have much time left on this earth myself, and feel I should waste no time in fulfilling her request. I loved my sister and now she is finally at peace. — Anne Wells

INTRODUCTION
My name is Ivy. This is my life story, which I held onto and bequeathed to my sister for publication no sooner than five years after my death. It will then no longer be necessary to hide all the details of my life, because I won’t be around to explain the why’s. Perhaps it will help others to know they are not alone in making mistakes, facing misfortunes, and overcoming challenges. Frankly, my children would have been too embarrassed to know all these details of my life while I was still on the planet, and I would have had a difficult time facing them. The names and some places have been changed to protect the innocent. The dates and my experiences are accurate.

from Chapter 9: MAKING PORNOGRAPHY
On March 3, 1873 Congress enacted the so-called Comstock Law, which made it illegal to send any “obscene, lewd, or lascivious” books through the mail. The law also barred sending anything “designed or intended for the prevention of conception or procuring of abortion.” The law was named after Anthony Comstock, a U.S. postal inspector, who devoted much of his life to fighting what he perceived as vice, particularly obscenity and gambling. As he once put it: “The place for a woman’s body to be denuded is in the privacy of her own apartments with the blinds drawn.”

Even though this law was enforced until it was declared unconstitutional in 1965, it has never been repealed. The Comstock Law prompted about half the states to adopt their own restrictions on sexually oriented material. As a result, James Joyce’s Ulysses was barred from being imported into the United States until successive court challenges finally determined that it was not obscene. Throughout the 1920s, the U.S. Post Office Department burned copies of the novel that travelers had brought back from Europe.

The current standard set by the U.S. Supreme Court exempts obscenity prosecutions against any material that has, as broadly defined, literary merit. The work, taken as a whole, must now lack any “serious literary, artistic, political or scientific value.”

At the time the Comstock Law was still in effect, my husband Boyd became involved full-time with sending porn in the mail. One day after I had arrived home from work, Boyd told me to sit down as he had a wonderful way for me to help peo-ple. He said that Dr. Mervyn Alherst, a psychologist, had contacted him and told him that in order to help sexual addicts recover, they should see as much pornographic literature as possible. I immediately objected, but after much arguing, Boyd convinced me to become his model for pornography. Deep down I was actually enamored with the idea and ultimately became a willing model. After all, I reasoned, I was helping those addicts.

When a niece discovered some pornographic pictures while visiting me, she was horrified at the look on my face in pictures taken during my episodes of sex with a partner. Needless to say, it was plain to see I was thoroughly enjoying it. My niece was repulsed and fascinated at the same time. She was also a snooper; I found out later that she had told her mother about them. My sister and my brother-in-law were aghast and my brother-in-law only tolerated me after that. My sister always did accept me.

My brother-in-law was convinced that once someone goes astray, there is no forgiving them, ever. I never really liked him anyway; he was quite a tyrant and his children grew up in terror of him. If he happened to stay at home because of illness, he would constantly be looking out the window, keeping track of his children’s every movement. He constantly criticized my sister for not doing the same.

Several nights a week, Boyd would go to bars or other public places and convince men to engage in sexual acts with me. Boyd gave his prospects the “psychological” pitch and he had no trouble getting willing participants. As I said earlier, Boyd was charming and could sell an ice box to an Eskimo. Since I worked during the day, these sexual encounters had to take place in the evening....