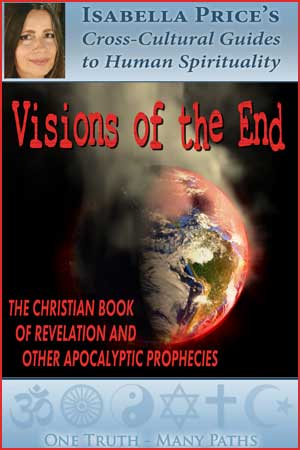 The belief that our world will be purified by catastrophe, and redeemed by the return of Jesus Christ in our lifetime, is strongest in the United States and continues to shape our moral, military, and geopolitical concerns to a considerable extent. Indeed, visions of the end-times have been an enduring feature of the Judeo-Christian traditions of the West for millennia.

Yet, how may we understand the “end” in the Christian Book of Revelation? As a confrontation “willed” by a fearsome and punitive God to eradicate “his” people’s enemies – or as a transition characterized by turmoil and the birth pangs of new beginnings?

Visions of the End: The Christian Book of Revelation and other Apocalyptic Prophecies takes you on an insightful and thought-provoking journey beyond the scenarios of doomsday novels and Hollywood blockbusters….

Rapture, Tribulation, and Armageddon
A plain reading of Revelation suggests that everyone on earth – men, women, children, saints and sinners alike – will be compelled to endure the suffering to be inflicted on humankind by the Antichrist during the Tribulation. Only after these final days of suffering will the martyrs and dead saints be raised from their graves and allowed to enjoy the fruits of their just rewards in the millennial kingdom to come. But some Christians in nineteenth-century America refused to believe that they would have to endure such afflictions. They embraced a new and highly inventive version of the end of the world…

The “Warrior Jesus” of the “Left Behind” Novels
The vision laid out in the “Left Behind” novels, which drew inspiration from Revelation, divides the world between the righteous and wicked, pure and impure, believers and unbelievers. Jesus Christ descends from heaven in the guise of a warrior-king… The loving-kindness aspects of Christ, which are so emphasized in the Gospels, are practically non-existent in these texts… Dualistic and ethnocentric views have always resonated within the psychological mindsets of religious fundamentalists, who experience the battle against their perceived enemies as a “cosmic war” between the forces of good and evil. Their obsessive focus on the end-times usually leads to disinterest in taking care of the affairs of our world…

ORDER NOW FROM THESE DIGITAL RETAILERS:

SEE THE SERIES
LEARN MORE AT THE ONE TRUTH, MANY PATHS WEBSITE