How a Scientist Learned to
Hear Her Inner Wisdom

From the moment she nearly drowned in a tank of cold water at the age of three, Ingrid Honkala was aware of other dimensions of life than those most of us normally experience.

She was also gifted with the wise input of mysterious“Beings of Light” who gave her invaluable insights and assistance as she faced the challenges of growing up, falling in love, and finding her professional destiny as a research scientist and oceanographer.

In a compelling life adventure that journeys from her native Colombia to Europe and her eventual home in the United States — and from a deadly war zone to underwater explorations and a NASA research center — the author reveals how any human experience can be illumined from within.

If we are willing to pay attention to subtle signals, take our intuition seriously, and forgive our most challenging difficulties, anyone can experience a brightly guided life.

Ingrid Honkala, PhD was born in Bogota, Colombia, where she grew up with her parents and three sisters. Despite many hardships she accomplished her dreams, becoming not just a successful marine scientist, world traveler, and a mom, but also a mentor and a giver of Light. Throughout her life she has been guided to meet and help many people on their journey to become aware of a deeper reality, and reconnect with their inner wisdom. Connect at her website. 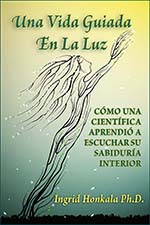 I WAS NINE years old when my dad took us to Cartagena for summer vacation. At the time he worked for the Security Ser vice Agency of Colombia (now known as National Intelligence Agency). While working with this agency my dad had to travel all over the country, and due to the nature of his work he was often invited to interesting places. This time we visited a US Navy warship. We never had been on a boat this size before, so while on board we were very excited, looking around as we were learning about the ship’s defensive capabilities. My dad was thrilled and kept asking questions. Everybody looked so proud while sharing the knowledge about their ship with us. More than being impressed by the ship, I was drawn by their passion and by the confident way they managed themselves.

At the end of the tour we encountered a Navy Petty Officer dressed in white standing at the gangway. He saluted my dad and shook his hand while my dad thanked him. My mom and sisters said “thank you” as well. I was the last in line and once it was my turn, I wanted to shake his hand too. As soon as I touched his hand, I was instantly taken somewhere else in my mind.

I was standing in an unknown place. It was a large room surrounded by columns and handrails. Feeling puzzled, I kept looking around until I saw a young, handsome guy staring at me with large piercing eyes, a few yards away at the end of a short corridor. He was blonde, with bright blue eyes, wearing a camouflaged jungle uniform with his face partially painted. I couldn’t take my eyes off him. He smiled at me and said in English, “Hey it is me, I am glad to meet you.”

I understood because I was learning English at school. Feeling utterly confused I asked, “Who are you?” He only kept looking at me and smiling, then I heard the Beings of Light say, “Some day you will meet and marry.” Immediately after hearing these words I was back at the gangway. Feeling perplexed, I abruptly let go of the petty officer’s hand and stepped back.

“Yes! Okay! Thank you,” I said with agitation, then ran to catch up with my family.

I had been having visions since my near-death experience. The Beings of Light had told me that everyone has access to the “unmanifested” as long as the limited mind is out of the way. However, I never felt so shocked about any other vision before. At this age I wasn’t interested in boys at all, and seeing my parents struggle so much with their marriage had me thinking that I never wanted to get married. That night I asked the Beings of Light, “What do you mean about me meeting and marrying that guy? I am just a child!”

“As you already know, you just had a glimpse of what has been already created. Only when you are ready will it manifest,” they answered.

“But, who created this one?” I asked.

“You were so thrilled about the people and the experience on the ship that you wished someday it would be your own reality. Now it is there and someday you will be a part of it. As we have told you before, no one else but you can create and shape your own reality. It is an ongoing process that started long ago, even before you assumed this human form.”

“The people and the ship were very nice, so I don’t mind that. But who is that guy? Why would I marry him?”

“You will not only marry him. He will take you to his country and you will greatly help each other and many other people too.”

“At church they say that marriage is forever. If I don’t like him, can I divorce him, like Grandma Lilia did?”

“You will do what feels right to you,” they answered.

Their last comment made me feel better because it gave me a sense of freedom, since in Colombia at the time, divorce was re-garded as sinful by the church and its followers. However, at this age I was already refuting the belief that people had to stay married even though they didn’t love each other.

After the Beings of Light left, I was still thinking that it was not in my interest to get married so I decided that it was best to erase this vision from my mind. Still, an intense desire to learn English developed within me. Although I was learning it at school I never felt drawn to it before. I also began feeling very interested in the United States and its people. For the first time, I was fascinated by this subject. It was as if I had opened a door that wasn’t going to be easily closed.