"In this fascinating book, Gary Tiemann gives us a wonderful comparison of A Course in Miracles to major psychological approaches, some of which bear a striking resemblance to the Course. He also explains how he integrates the Course into his profession. Having known Gary for years, I can say he not only teaches these things but really lives them. I highly recommend this important work to all people who are on a spiritual path." — Gary R. Renard, author of The Disappearance of the Universe trilogy 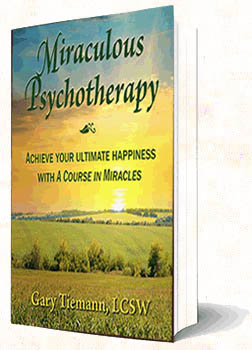 As a psychotherapist, it is my vocation to explore the challenges and curiosities of life with my clients. We often begin with their most obvious problems. But to be truly useful, I’ve learned that we must eventually explore the existential depths of our being. No small task! But if we are willing, our teachers will appear, to lead us where we need to go.

Let me share with you what I have learned along the way of such journeys. In this book I offer some of my personal experiences, as well as what I was taught by my profession and clients. Most importantly, I will share with you the gift called A Course In Miracles, and suggest how it can teach you to achieve your ultimate happiness.

"Miraculous Psychotherapy provides the most clear and concise description of the tenets of A Course in Miracles that I have read. It is a valuable treatise for psychotherapists, patients, seekers, and students of ACIM.— Walter Semkiw MD, Founder of ReincarnationResearch.com

Gary Tiemann received his MSW from Louisiana State University in 1987. He started his social work career as an intern on the Mental Health Team at Louisiana State Penitentiary at Angola. He went on to practice at various mental health hospitals and agencies as a case manager, staff therapist, and Program Administrator and Clinical Director. He has had a private psychotherapy practice in Shreveport, Louisiana for over twenty-five years. Visit garytiemann.com


Introduction:
Does It Ever Seem Like the World is Insane?

Good news: The world IS insane! This is good news because it means you’re perceiving things correctly. That’s not easy to accomplish, and it means you may feel so out of step with the world, and the people around you, that you’ll be tempted to start doubting yourself. You can easily start thinking, “Maybe I’m the one who’s crazy.”

So let’s take a look at just a few random bits of evidence of the world’s insanity.

The fate of the world may rest on a popularity contest. Maintaining the most powerful military force the world has
ever known, the United States elects a person to be in charge of such power through an election process that’s basically a popularity contest. The outcome of that contest can turn on how well a candidate comes across in thirty-second soundbites. And those soundbites are broadcast by a media system that is more concerned about profits than revealing the truth. The popularity contest winner is placed in charge of an arsenal that can annihilate the world many times over. (And some of the most powerful weapons are called “peacekeepers.”) Insane as that may sound, this “American way” is less crazy than some others!

Love, romance, and marriage don’t work very well. Traditionally, our culture has placed a powerful emphasis on falling in love so that we can become ready to publicly promise our eternal love and devotion to one another — vows which fail over 50% of the time. We promise to love and honor forever, unless we decide at times to kill each other. Or we sing romantic songs about how “it must be love” because of how bad it hurts.

Sometimes religion just makes things worse. Disillusioned by love and patriotism, perhaps you decide to place your faith in religion. Isn’t that where one finds a “saving grace”? Except that there are so many faiths from which to choose — and some of them will tell you, in no uncertain terms, that you’re risking eternal damnation if you choose wrongly. Others will threaten to kill you right now for having chosen wrongly, because you’re an infidel. Almost all of them will tell you, at least, that God loves you — but it’s a love that seems to come with a lot of conditions.

So this is where we psychotherapists come in. We’re supposed to be expert at defining and sorting out your anxieties about the world’s insanity. We are part of the “healthcare industry” that deals with such things, and we are driven by science, practicing “evidence-based medicine.” Perhaps you’ve engaged our services, and I hope it was helpful. It often is. I can truly say that the vast majority of the people I have known in my profession are kind, genuinely well-intended professionals who have only good will towards all they work with.

But there is no single, scientifically proven superior way in which to practice psychotherapy. The two chief icons of our profession, Sigmund Freud and Carl Jung, were truly well-intentioned pioneers and were doing the best they could, but they developed diverging points of view and methodology that persist in today’s different approaches to the work.

The perspective of Freud, who was always concerned with the acceptance of psychoanalysis by mainstream medicine, is still the cornerstone of therapeutic practice today. Jung, his protégé, felt that in order to effectively address the anxiety that plagued humanity, one had to consider the mystical and spiritual aspects of our being. This was in large part because he had experienced so-called “supernatural” phenomena personally, and would not simply rule them out as unworthy of scientific exploration, as Freud did. Thus they eventually came to a parting of the ways, creating a divergence in therapeutic practice that is still with us today.

I am a Licensed Clinical Social Worker (LCSW) practicing psychotherapy, a career that seems like it chose me, rather than the other way around. Through my career I have watched the psychiatric community move increasingly toward physical and biological explanations, and pharmaceutical remedies. Ideas that address the spiritual or mystical approach to psychological healing are generally ignored.

Not only could I not ignore them, but increasingly found these ideas fascinating and helpful. For instance, Buddhism raises the idea that “all suffering is in the mind, and when you learn to think clearly, all suffering ends.” That sounds very much like the work of psychotherapy, but the Buddhists have been studying this idea in a formal and disciplined way for about 2600 years. Perhaps we should consider what they have to offer.

One of my most powerful influences is A Course In Miracles (ACIM), a modern psycho-spiritual teaching first published in the mid-1970s that has since been distributed in over twenty translations around the world, reaching millions of readers. Comprising a lengthy Text, Workbook of 365 daily meditations, and a brief Manual for Teachers, the Course was recorded by means of an “inner dictation” heard by Dr. Helen Schucman, a psychologist at Columbia University, with the assistance of her supervisor, Dr. William Thetford. After ACIM itself was complete, Schucman wrote down some peripheral pamphlets, including Psychotherapy: Purpose, Process and Practice. The first two sentences of that work state: “Psychotherapy is the only form of therapy there is. Since only the mind can be sick, only the mind can be healed.”

I was hooked. As a therapy professional who’s been studying spiritual approaches including ACIM for thirty years, I’m convinced that this perspective is essential to healing. I’m offering this book for all those who are interested in learning how to think more clearly — because it is in the enhancement of inner clarity that our ultimate happiness lies.