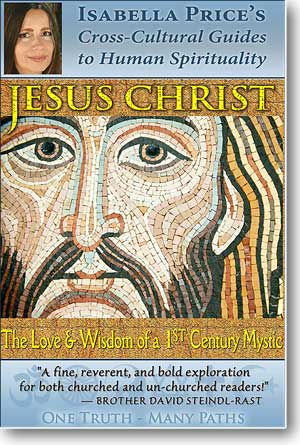 Why is Jesus Christ perceived so differently by people who all call themselves Christians? And what do we know today about this charismatic first-century Jewish teacher who came to be viewed as God incarnate in the Christian tradition? Today, many people have close ties to Jesus Christ’s person, life, and message – yet they have no connection with any Christian church.

Jesus Christ: The Love and Wisdom of a First-Century Mystic takes both churched and un-churched readers on a journey into the core of Jesus’ timeless teachings on love and wisdom. Of all the mystic pioneers of humanity, Jesus may well be one of the most daring and demanding, who opened up a revolutionary new path based on love in action, radical inner transformation, and an alternative social vision.

“A fine, reverent, and bold exploration of Jesus’ teachings for both churched and un-churched readers”— Brother David Steindl-Rast, OSB

"While reading Isabella Price's description of Jesus of Nazareth, I couldn't help but fall in love with this beautiful first century mystic. Based on a close analysis of the Gnostic gospels as well as the Pauline texts that have guided the mainline churches for centuries, Price emphasizes Jesus' two-fold central message of finding the kingdom of heaven within and expressing that insight as love in action. This book is an excellent resource, in very readable form, and especially for those interested in Jesus' teachings as they relate to integral theory, the perennial philosophy, and the mystical unity of all religions." — Dana Sawyer, professor of religion and philosophy at Maine College of Art and, most recently, author of Huston Smith: Wisdomkeeper, the authorized biography of renowned scholar of religion.

ORDER THE E-BOOK FROM:

Watch an interview with Isabella Price
on THE MOORE SHOW

An Overview of Jesus Within a Cross-Cultural Context
Jesus of Nazareth, the incarnation of God in Christianity, is one of history’s most compelling, multi-faceted, and elusive figures. How was this charismatic first-century Jewish teacher recognized as “God incarnate?” First, he seemed divine to his followers during his lifetime. His apostles and disciples experienced him as extraordinary – many left their conventional lives and risked everything to follow him. They experienced a “presence of the sacred” while with him. Second, Jesus embodied the aspirations, dreams, and hopes of some of his Jewish contemporaries, leading them to view him as the prophesied Messiah. Third, Jesus’ apostles and disciples experienced him as an ever-present divine reality after the event known as Pentecost, which occurred fifty days after his death. Jesus’ extraordinary significance for Christians is apparent in the testimony of his early followers who spoke of him in the most exalted terms imaginable.....

God’s Kingdom Within
Religion is not just about believing in the creedal statements or admiring Jesus, but about acquiring his consciousness…The living Jesus of the Gnostic scriptures emphasizes gnosis, self-knowledge and self-discovery, to a greater extent than does the Jesus of the New Testament. Self-knowledge is ultimately knowledge of the divine. Instead of being our “savior,” the Jesus of the Gnostic scriptures comes as a wisdom guide who opens the door to a deeper spiritual understanding. The Gnostic Jesus speaks of “illusion” and “ignorance,” not of “repentance” and “sin” as in the canonical Gospels ….

World Tree Symbolism, Cross, and Resurrection – A Cross-Cultural View
The commitment to the path of personal transformation as symbolized by the cross becomes even more compelling when we consider that Jesus Christ has not always been depicted as dying on a cross in European iconography. In a Renaissance painting by an unknown Alsatian master dating back to the late 15th century, Jesus Christ is on the “Tree of Life,” flanked by John the Baptist, the Apostle John, the Virgin Mary, and the Apostle Peter, among others. In this painting, it is the “living tree” that replaces the “dead wood” of the cross. The Tree of Life is a very rich and multi-layered symbol that we encounter in most of the world’s cultures. Nordic mythology recounts, for instance, how the god Odin voluntarily hung himself for nine days on the World Tree Yggdrasil to acquire the wisdom of the runes, the magic letters of the Nordic alphabet. Another example is the Kabbalist Tree of Life, which symbolizes a map of existence that reveals the structure of the universe and the evolution of human consciousness….

The major event of the Christian liturgy—the transubstantiation of the bread and wine into the body and blood of Christ—is reminiscent of the sacrificial act of Dumuzi, the god of the grain (body), and Dionysus, the god of wine (blood). Pre-Christian cultures commonly viewed the sacrifice as a gift to the mysterious source of life that would cause a seed to germinate. The same sacrificial theme can be found in the narrative of the death and resurrection of Osiris in ancient Egypt ….

LEARN MORE AT THE ONE TRUTH, MANY PATHS WEBSITE