AN INTERVIEW WITH ROY PARVIN
aka Yoga Matt, author of YOGA FOR THE INFLEXIBLE MALE 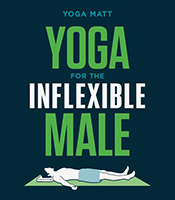 Fearless Literary author Roy Parvin (aka 'Yoga Matt') is an accomplished fiction writer whose first foray into nonfiction is YOGA FOR THE INFLEXIBLE MALE (Ten Speed Press, 2019). In the following interview, Roy reveals how nearly a year of severe sleeplessness led to his discovery of yoga.

When did you begin experiencing sleep problems, and what did you think was happening at first?
ROY: My sleeping problem started out of the blue one night in August, 2016. First one night, then a second. By the third consecutive night without sleep, I was aware there was an issue, which I chalked up to nerves. I was working pretty intently on a manuscript. Also, there was the Presidential election that fall and most of America seemed to be on edge. I concluded I was merely suffering from what everybody else was: worry about our country’s future.

What medical theories and treatments did you go through, and what ultimately worked?
ROY: At first I resisted seeing a doctor. The idea there might be a physical causality initially eluded me. Garden-variety insomnia was my armchair analysis and my first instinct was supplements from the local health food store. When that failed, acupuncture was next. Someone mentioned cannabis edibles.

After nearly five fruitless months of sampling over-the-counter remedies, I finally consulted my primary physician who quickly concluded it was a psychological problem. A number of dangerous medications were prescribed, benzodiazepines and various sleeping pills. For the next five months, these failed to work either.

Finally, I took an overnight sleep test. Only then did my doctor recognize that he’d been fighting the war with the wrong ammunition and an appropriate course correction was taken. The issue turned out to be physiological rather than emotional. My doctor, in other words, had misdiagnosed what was wrong and all the pills he’d prescribed for me actually placed me in much greater jeopardy. The major lesson for me was that doctors can make mistakes just like the rest of us. We, as patients, need to fully question their medical theories and treatments, particularly the general practitioner, who’s the first line of defense.

What were the emotional/psychological aspects of so much sleep deprivation?
ROY: Sleep deprivation is a common form of torture and for good reason: it breaks the spirit rather quickly. Among experts, two days without sleep is considered a sleep crisis because reasoning goes out the window along with awareness. It’s not surprising that most of the largest industrial and transportation accidents of the last fifty years were due to lack of sleep.

From a personal psychological standpoint, not sleeping produced a withering sense of aloneness and shame, which made me feel I was suddenly different than the rest of humanity. Eventually, being awake for 339 consecutive days left me with a temporary form of dementia. I stopped driving the car because I’d often forget where I parked it. I’d forget what I had for lunch five minutes after eating. All semblance of writing and work stopped. I simply wasn’t in the right state of mind.

When did yoga enter the picture? What were your initial reactions to the idea of yoga, and how did they change?
ROY: I guess reaching out to try yoga is an indication of how desperate I was. Back then, I largely considered yoga to be an activity women did. Mostly because guys seemed too big and clumsy to perform it. Maybe yoga doesn’t translate for most guys because it doesn’t involve competition and that’s what most men associate with physical activity.

Even so, women had been recommending yoga to me for my sleep issue, but it took a yoga studio coming to town to provide the catalyst. I approached the owners about a class solely for inflexible males like myself and it immediately sold out. The revelation to me was there evidently was a large latent population of yoga-phobic men like myself who might secretly be interested in doing yoga.

Did it require a crisis so severe to bring yoga into your life, or do you think it might have happened regardless?
ROY: I’m such a stick-in-the-mud male weenie that it took a crisis. Before that, I’d chiefly lump yoga into the category of stretching: perhaps necessary, but not very exciting. As an athlete—a competitive cyclist—I was aware of the inroads that yoga had made in professional sports. But there was still, I suppose, a kind of new age barrier: Isn’t yoga performed in a quiet room? Would I have to grow a beard?

I was afraid of looking stupid, inept. I’m fairly good at that without yoga. Obviously, a Western sense of competitive sport had infiltrated my thinking. It took a while to realize that yoga is a practice, not an athletic competition.

Do you recommend yoga for insomnia, or for other purposes?
ROY: I recommend yoga for everything, actually. It’s great for people with a temporary sleep problem due to stress or modern life in general. Yoga acts like a chill pill while keeping Big Pharma out of the equation. It slows everything down and, if you do it right, the rest of the world goes away for an hour.

So for garden-variety insomnia — or other small bruises of the psyche — yoga is the perfect medicine. But don’t make my mistake. If your sleeping problem persists see a doctor and ask about a sleep test from the outset. In my case, that saved my life.

Besides buying the book, of course, what is your general advice for 'inflexible males' -- in regard to yoga practice or anything else, for that matter?
ROY: Don’t be afraid to make a fool of yourself. By that, I mean clumsy, inept, not the best person in the room. We guys tend to be competitive in everything and yoga isn’t about competition. It’s a physical activity you do yourself that’s often performed in a room full of people. It requires a little internal male calibration and letting go. Yoga is all about getting you in your comfort zone. But for guys that often entails getting out of their comfort zone first.

Put in the more vernacular: hey guys, unclench your keister and don’t be afraid to try something new that might be good for you! That advice applies equally to yoga or Brussels sprouts.

ROY PARVIN is also the author of two books of fiction. His fiction has been awarded the Katherine Anne Porter Prize, a National Endowment For the Arts Grant in literature and a Bread Loaf Fellowship. His work has been widely anthologized and included in the Best American Short Stories series. His novella “Menno’s Granddaughter” was adapted into a full length movie by the French Director, Claude Miller, entitled Voyez Comme Ils Dansent, which won the 2011 Grand Jury Prize at the Rome International Film Festival. His other books include The Loneliest Road in America (Chronicle Books), and In the Snow Forest (W.W. Norton).