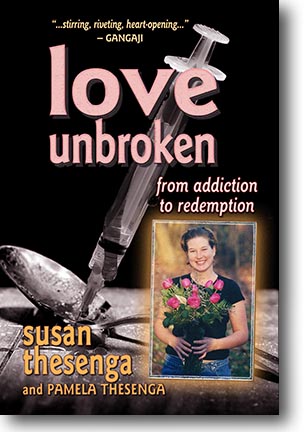 "A harrowingly honest narrative of trauma, suffering and addiction, Love Unbroken is also a triumphant story of soul redemption." —Gabor Maté M.D., author of In The Realm of Hungry Ghosts: Close Encounters With Addiction

Love Unbroken: From Addiction to Redemption is a mother-daughter memoir detailing Pamela Thesenga's ten-year descent into extreme drug addiction, and her and her mother Susan's unusual path to recovery.  They ingest ayahuasca, a rainforest psycho-active tea considered sacred by the indigenous people of the Amazon, in spiritual ceremonies in Brazil and in the U.S.  They undergo shamanic extractions from native healers, and follow inner guidance from the Divine Mother. They emerge from these encounters profoundly changed.

After a traumatic birth and early life, Pamela finally allows bonding with her adoptive mother Susan over their shared effort to combat the family disease of addiction.  After years as a successful psychotherapist and spiritual teacher, Susan's idealized self-image crumbles and her heart breaks wide open witnessing her daughter's suffering.

Pamela and Susan give a harrowing, honest picture of the impact of drug addiction on the family.  Pam survives as a heroin addict in the slums of Washington D.C. and as a cocaine addict in the favelas of Brazil, and she roams wild as a meth addict in the city parks of San

daughter from the streets and also learns to let go, and let the disease of addiction take its course.

In addition to conventional treatment, Susan sends Pam to a treatment center where she uses the African sacred plant Ibogaine, and joins her in Brazil and in the U.S. for ayahuasca ceremonies.

As Pam and Susan grow in acceptance and compassion for the suffering of drug addicts and their families, they are shown a spiritual reality deeper than all the traumas and dramas of the human condition--the universal, unconditional presence of love unbroken.

Pink Bunny Slippers
(from Chapter 22: Miracle on the Street)

California, November 2001: Pam has not just hit bottom; she’s living there. Like a bottom-feeding fish in a deep ocean, she doesn’t seem to have any way to swim upward toward the light.   I am living my own bottom, as our lady of perpetual sorrow. I’m functioning, but a large part of me is on hold, just waiting for “the call.”

I walk to the Walgreens up the street from the freeway bridge.  I’m so sick. I’m wearing pink bunny slippers and they’re all wet from walking in the puddles and streams that are hard to avoid when it rains.  And it’s still raining. I sit against the wall outside the store. I am not able to move easily, I have stomach cramps and blurred vision. I have to get some money for a fix soon.

A man rides up on his bike and comments that I make a dry patch on the ground. He looks kind of beat-up, like a dude who probably smokes, so I ask him for a cigarette. He smiles, pauses, gives me a cigarette.  His eyes are bright blue, and seem to have light coming from them.  It’s such a grey day.  He sparkles and I hurt.

He seems to know my situation and I say yes, I’m a heroin addict. He says, simply, “I’ll give you some more cigarettes and my phone number. If you want some help, a way out, call me this evening.  I’ll talk to my wife and we’ll see if we can help.”

I’m normally turned off by guys. You never know what they might want and I’m too sick to turn a trick. I don’t even beg for money.  I just say okay. And then he leaves.

I must have gotten a fix somehow because my next memory is being at a payphone far away from Walgreens; I wouldn’t have been able to get there without some dope. Now, it’s strange that I’m even thinking about calling  because, after I get high, I’m not worried about being “helped” in any way other than a place to sleep or more drugs or money. I have a feeling this guy isn’t any of those things. “Oh, God, here we go again.”

But then I remember his saying he had a wife. And I remember the light in his eyes. That light is somehow familiar.  It reminds me of the light I once knew back when I was drinking Daime (ayahuasca sacrament).… I figure I might as well give it a shot. What the hell? So I call.

My next memory is sitting in his apartment, and I feel safe. Finally, I feel safe. The first thing Jeff tells me is that he has methadone, so I won’t be sick. He doesn’t say “Have sex with me” or “Don’t steal my stuff.” He doesn’t say, “You’re a loser, and I’m better because I’m clean.” He knows exactly what I need. He gives me methadone. His wife Karen makes me a peanut butter sandwich and lets me take a bath. She shows me how to clean out the abscesses that are developing on my legs. I can hardly believe it. They know exactly what I need.

Then Karen gets some pot and we all three smoke together. Jeff and Karen are devoted to each other; they’re addicts who have used drugs more years than I have been alive. They were on the streets for years, hauling their belongings around in a grocery cart. They were abandoned by their families long ago. They’re both HIV positive, have Hep C, and are already pretty sick. Karen injected herself with HIV when she found out Jeff had it, because she didn’t want to be separate from him. Her arms are covered with scars from having cut herself as a young mental ward patient. She still occasionally cuts herself when the pain gets too bad. But they’ve gotten their lives together enough to have a subsidized apartment, and disability money to live on.

That night I hear so much about their lives on the street that I learn exactly what’s ahead for me if don’t get free from the stranglehold of my addiction.   After two days of being with them, I’m ready to call my mom. I tell her I’m really done this time. It’s over. All I want is to get and stay clean, and I’ll do whatever it takes. I ask if she can come out and bring me back to the East Coast so I can get clean there.

The call comes on November 14. Pam tells me she’s with a man named Floyd, who helped her get her head straight enough to call me. When I talk with him he tells me Floyd is his street name, but his real name is Jeff. He says that he’ll get Pam into a methadone program at San Francisco General Hospital later that day and that he believes Pam is serious about wanting to quit. He gives me his address and two cell phone numbers.

What can I say? That I’m not worried about the plane, that I’m actually praying for myself to be calm and firm when I meet my heroin-addicted daughter fresh from a month of living under a bridge in San Francisco, a daughter whom I haven’t seen in almost a year and a half?  I politely say “thank you” and return to my beads.

The drive from the airport to the Mission District is short, and my mind is calm. I get off at Army Street, and soon cross under a bridge. I see the makeshift shelters of maybe twenty people there, and I know this is likely the very bridge that has been Pam’s most recent home. Picturing my daughter among these residents brings the fuzzy impression of her homelessness into sharp Technicolor reality.

As I near the address, I spot Jeff: a tall, thin, somewhat beat-up and sad-faced middle-aged white man with stringy beard and hair.   He and I walk toward a red-brick apartment building, typical public housing. My heart leaps as my eyes lock on a large bleached-blond tattooed girl with a lip ring walking toward us. I’m sure it’s Pam and that now the moment is here — we’re actually going to make contact....